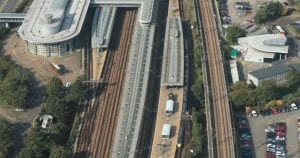 Ashford’s international high speed connections have been secured after work got under way on a £10.5 upgrade to the signalling equipment and platforms at the town’s international railway station.

Recognising the importance of the rail connections to Ashford’s growth, the South East Local Enterprise Partnership (SELEP) successfully made a £9.8m bid to the Government’s Local Growth Fund on behalf of the Kent’s business community and residents.

Network Rail has begun work on installing signalling equipment to allow Eurostar’s new e320 trains, as well as those of any other international high speed rail operators, to stop at Ashford.

In April 2018, the first of Eurostar’s new e320 trains will call at the station and use the amended platforms and signalling system en route to Brussels and Paris.

Christian Brodie, Chairman of the South East Local Enterprise Partnership, said: “The importance of the new signalling system to the future of Ashford, and connectivity of Kent to mainland Europe, was very quickly recognised by ourselves and our partner, the Kent & Medway Economic Partnership.

“Having successfully secured £9.8m from the Local Growth Fund, work is now under way and it will ensure Kent retains its two international stations on the country’s only high-speed rail line.”

Network Rail’s senior commercial scheme sponsor, Mark Ellerby, said: “The work will future-proof the town’s station and preserve its status as part of Europe’s high speed network – one of only four stations in the country to have that honour.

“High speed rail and links to Europe have given Ashford a huge boost over the past 21 years and we are pleased to be working with Eurostar and authorities to keep that going.”

The bid to the Local Growth Fund was also supported by Kent County Council and Ashford Borough Council.

Kent County Council’s Cabinet Member for Transport, Cllr Mike Whiting, said: “We fully support this investment which will ensure that Kent continues to be served by European rail services at both its international stations.

“I look forward to the launch of the project in April this year, and the great travel opportunities to continental Europe this will secure for Ashford and the wider Kent economy.”

“These works may cause some disruption for residents and passengers over the next few months, but the benefits to Ashford’s economy and its ongoing success will be well worth it to retain direct rail access to Brussels and four of France’s five largest cities.”

For more information including the business case for the Ashford Spurs Railways Station click here.