Recent Government announcements are proof the economic importance of the Thames Estuary  is back on its agenda alongside the Northern Powerhouse, Midlands Engine and the Oxford-Cambridge Arc.

The renewed interest in the Thames Estuary hasn’t gone unnoticed by the area’s business community. More than 300 business leaders, many from the built environment sector, attended the Thames Estuary Development Conference to get a better understanding of the economic plans for the area. 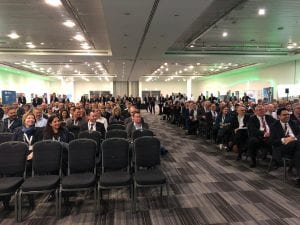 In the response the Minister put forward a number of new measures as part of wider Government support, including a commitment to give:

The Thames Estuary continues to be a vital economic corridor between London and communities in Kent and Essex, with its ports being a 24/7 gateway to other international economies.

The executive summary of the response states: “The Thames Estuary has a long history of previous efforts to drive economic growth and productivity. The Thames flows from one of the world’s greatest cities through world-class wetlands and ports, yet despite some serious effort it still does not fully deliver on its great potential.

James Brokenshire has described the Thames Estuary as being on a comparable scale to the Midlands Engine, Northern Powerhouse and Oxford-Cambridge Arc.

The need to improve the area’s connectivity to the rest of the UK and mainland Europe has also been recognised with the Government’s support for a new £6bn Lower Thames Crossing between Tilbury and Gravesend.

In recent years, industries along the estuary have come and gone. Today there’s an emerging creative and digitally-driven economy that is sitting alongside the area’s more traditional ones of manufacturing, distribution and logistics.

Speaking at the conference, Adam Bryan, Chief Executive of the South East Local Enterprise Partnership, said: “During the last few years the Government’s economic focus has been on how best to regenerate the Midlands and the North. 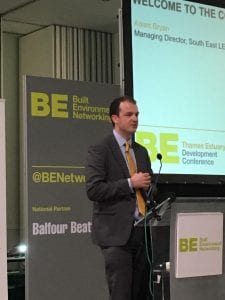 “There is now the recognition in Government that its aspirations for the Midlands and North will be delivered quicker with a stronger Thames Estuary economy. This has put the area back at the top table of Government policy on growth and SELEP will ensure the business voice continues to be heard.

“SELEP has invested 40 per cent of its financial throughput into the Thames Estuary and it is central to our priorities. It was clear at the conference that there is a will to working together and we have the components required to drive growth and take the Thames Estuary economy forwards.

“It is imperative we make the most of this opportunity, put the strongest possible case and ensure we capitalise on the economic momentum developed across the area.”

The Government has a cknowledged the role that innovation will have in supporting the area’s growth and supported the creation of the North Kent Enterprise Zone, covering Ebbsfleet Garden City, Innovation Park Medway and Kent Medical Campus.

Matthew Norwell, Chief Executive of Thames Gateway Kent Partnership, added: “The agenda for the Thames Estuary is now no longer simply about being a place where thousands of new homes will be delivered.

“Today, the focus is on how to create a balanced economy, one built upon high quality jobs and much needed infrastructure, which in turn drives the demand for well-designed quality new homes, and helps to create sustainable, prosperous and thriving communities.”