A133 Colchester to Clacton

The A133 is the key route providing access from Colchester to the seaside resort of Clacton–on–Sea and allowing access from the district of Tendring into Colchester. The purpose of this project to deliver a package of schemes to provide highways capacity, cycling and safety improvements for the Colchester to Clacton corridor. 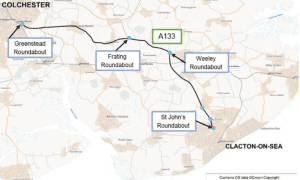 National Planning Guidance states that plans should maximise opportunities to accommodate the efficient delivery of goods and supplies, give priority to pedestrian and cycle movements wherever possible and minimise conflicts between traffic and cyclists or pedestrians. This route based strategy aims to do just that. The following improvements were identified from a Route Based Strategy (RBS) study:

Improvements to these two roundabouts will form the reduced scope for the project and will be delivered within the available budget. The remaining elements of the original project will be paused until sufficient funding is identified through alternative funding sources to enable delivery.

Take a look at our update on the delivery of the Local Growth Fund (LGF) and Growing Places Fund (GPF) capital programmes.

In total the SELEP Growth Deal with Government has brought £579m of investment to East Sussex, Essex, Kent, Medway, Southend and Thurrock. Over the lifetime of the Growth Deal (2015-2021) we aim to deliver 78,000 jobs and 29,000 homes across the SELEP area, with the Deal set to attract a further £960m of investment into the South East over the six year period.