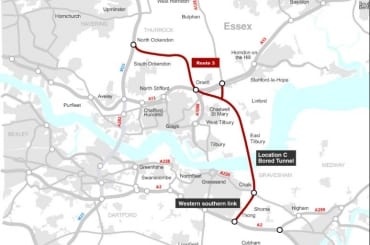 “A major economic shot in the arm” is how the South East Local Enterprise Partnership (SELEP) and partners have described the Government’s decision to give the green light to the construction of a new Lower Thames Crossing and a package of other local transport projects.

After working closely with Highways England and strongly campaigning for a new crossing of the Thames, SELEP, which champions Kent, East Sussex, Essex, Medway, Southend and Thurrock, has warmly welcomed the announcement by Rt Hon Chris Grayling, Secretary of State for the Department of Transport.

The announced route for the new Lower Thames Crossing is Route 3, option C with the western southern link, the one preferred by Highways England and supported by SELEP and its business community.

When complete it will link the M25 between Junction 29 and 30, and cross the Thames via a tunnel between Tilbury and east of Gravesend, before connecting with the A2 near Shorne in Kent.

Also announced is the £66m investment to widen the A13 – a major route through Thurrock and the Thames Gateway growth area and directly enable the creation of an estimated 4,045 new jobs and 3,340 new homes by 2021.

The A13 widening will also support the delivery of the £3.3 billion of private sector-led, nationally significant development of DP World London Gateway, Thames Enterprise Park, the Lakeside Basin and the Port of Tilbury, which will create 33,000 new jobs, and new homes.

A further £10m will be invested to alleviate congestion and the environmental impact of the current crossing at Dartford.

Christian Brodie, Chairman of SELEP, said: “This is excellent news for Kent and Essex, as these three announcements will have a significant economic impact. The investments announced will strengthen the resilience of our UK and European connections – imperative as we now move towards Brexit.

However, the benefits go far beyond Kent and Essex. With the current Dartford Crossing already operating at capacity and freight traffic continuing to grow, the new crossing will also support the Government’s wider economic aspirations for the Northern Powerhouse and Midlands Engine.”

Responding to local concerns to the proposals, Christian Brodie added:

“We recognise that there will be those in Gravesham and Thurrock who won’t welcome the decision. This project is of national significance, we must now ensure its route makes the least possible impact on the local environment and communities and provides much anticipated benefits of reduced congestion, new jobs and housing.

It is vital we get the traffic flowing better across the Thames and must get the work started so the economic benefits can start to flow as soon as possible. “A big thank you must go to the area’s MPs and business community who came together to argue the case for the new crossing to Ministers.”

SELEP is urging local politicians and the business community to keep the pressure on Ministers to avoid any further delay in the route going through the planning process, in order to take the pressure off the existing crossing and community at Dartford.

Over the last two years, SELEP has engaged with its federal partners, the region’s stakeholders and business community and received overwhelming support for a new crossing.

Geoff Miles, Chairman of Kent & Medway Economic Partnership, and Kent Vice Chair of SELEP, said: “Despite our proximity to Europe and London, Kent – and Dartford in particular – has borne the burden of congestion on the M25, which has held back trading links with Essex and beyond.

“A new crossing will unlock the local economy and help create an environment in which businesses can flourish.”

George Kieffer, Vice Chair of SELEP for Essex, Southend and Thurrock, said: “Recent investment in our ports of Tilbury and DP World London Gateway means that we are strengthening our international trading routes and their access to the this new route is essential. The investment in the new crossing and A13 widening will transform our UK connectivity and stimulate the Essex economy.”

Graham Peters DL, Chairman of Team East Sussex, said: “The benefit of the investment in a new crossing will be felt by businesses across East Sussex. It will enhance the resilience of the South East’s transport network and reduce the daily uncertainty over the performance of the Dartford crossing.”

Tim Waggott, Chief Executive, Port of Dover, said: “The Port handles up to £119 billion of trade or 17 per cent of the UK’s trade in goods and is vital to the UK’s trading relationship with Europe – our largest and nearest trading partner.

“Half of its freight traffic is heading beyond London to support economic activity in the Midlands Engine and Northern Powerhouse government priority areas. With freight traffic through Dover growing by a third in only four years and with a forecast 40 per cent growth in freight traffic by the end of the next decade, it is essential that traffic fluidity is maintained and enhanced on this key trade corridor connecting the rest of the UK with mainland Europe.

“The Lower Thames Crossing is an essential ingredient of the strategic infrastructure mix required to deliver national economic prosperity. The Port fully supports today’s announcement by the Government and warmly welcomes its commitment to keep the nation’s traffic and trade moving.”

Jo James, Chief Executive of Kent Invicta Chamber, who represents business on SELEP, said: “This decision sends the strongest possible message to business that the Government recognises the importance of investing in our strategic infrastructure in order to build a strong national and regional economy.”

John Keefe, director of Public Affairs at Eurotunnel, said: “Eurotunnel welcomes the Secretary of State for Transport’s announcement that the route for the Lower Thames Crossing has been decided and that this essential infrastructure will be built.

“Easing traffic congestion to the East of London is essential for the supply chains that feed our industry and to access the markets where the UK sells its goods. We now need to build the crossing as soon as possible and fully connect it to the surrounding infrastructure”.

Charles Hammond, Chief Executive of the Forth Ports group (owners of the Port of Tilbury), welcomed the Government’s decision on the route of the Lower Thames Crossing, while continuing to make the case for a junction into the Port of Tilbury area: “With Brexit looming, it is imperative that the UK prioritises major infrastructure improvements to key international trading corridors.

“This investment is as much about north-south connectivity, as east-west road links on-and-off the motorway.

“It is vital that nationally significant transport operations like the Port of Tilbury have high quality and reliable road connections. That’s why we will maintain the case for an all-moves junction off the new motorway into the expanding port area.”

Tilbury supports option C, but with the proviso that the proposed crossing and new road through Thurrock provides a step-change in the connectivity to-and-from the port. The Port calls for the inclusion of an all moves junction east of Tilbury with a direct link to the Port of Tilbury area. The additional junction is vital to:

Denise Rossiter, Chief Executive of Essex Chambers of Commerce, added: “We welcome the fact that the Government has made a decision on the Lower Thames Crossing.

“Like Forth Ports we too support option C and share with them their desire to see an all moves junction east of Tilbury. As they rightly say, with international trade assuming even more importance once we leave the European Union, it is vital that we have the right infrastructure to provide access to and from our ports, whilst at the same time providing relief to the local road network around Tilbury.”