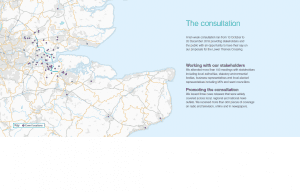 At the end of 2018 a consultation was undertaken on the proposed route for a future crossing across the Thames.

Highways England received a record breaking response with almost 29,000 people sharing their views and around 15,000 people attending the 60 events held during the consultation.

These results include the feedback from the many residents and businesses who got involved in the consultation.

The South East Local Enterprise Partnership (SELEP) is pleased to see such high levels of public response and interest from across Kent and Essex on the need for and future location of the proposed Lower Thames Crossing.

Christian Brodie, Chairman of SELEP, said: “The level of response, and high levels of support for the project, should send a strong message to Government that this is a priority for the area. We recognise there are those communities that will be impacted upon by the route, but we are confident that Highways England is doing everything it can to design in mitigation measures.

“Highways England has delivered on its promise to consult across the region. Due to the scale of the response we understand that the submission of the DCO will now be summer 2020, but that this slight delay will not impact on the construction programme with the crossing on target to open in 2027.

“The Lower Thames Crossing is a gamechanger project for our area and offers wider economic benefits to the UK by improving the resilience of the road network and connectivity to our international ports.”

SELEP recognises that Thurrock Council are not supportive of the proposed route, SELEP would like Highways England to ensure local areas can benefit as much as possible from the proposed development.

The report can be found here LTC – Project update – Summer 2019